This website was created for the predictions for the upcoming Congressional Elections made by the Political Statistics class at Montgomery Blair High School in Silver Spring, Maryland. Under the guidance of Mr. David Stein, this model (which we named the Overall Results of an Analytical Consideration of the Looming Elections a.k.a. ORACLE of Blair) was developed by a group of around 70 high school seniors, working diligently since the start of September. Apart from the youth and enthusiasm that went into making it, the advantage our model has over professionally developed models is transparency. Unlike professionals, we need not have any secrets in regards to how our predictions are generated. In fact, the sections that follow attempt to detail exactly how we come up with all of the numbers involved in our model. If you are interested by politics, statistics, education, or just agree with our predictions, please tell your friends and social media followers about the work that we’ve done.

To calculate and adjustment for the national mood, we started with an estimation of the expected major-party voter turnout in 2018. To get this, we started with the sum of Democratic and Republican voters in each Congressional election in 2014. In cases where the 2014 turnout in a district was problematic due to their not being a contested House race (leading to low vote totals) or due to redistricting, we used the 2016 turnout in that district scaled down by the ratio of 2014 average contested district turnout to 2016 average contested district turnout (which is less than 1). In cases where the 2016 turnout is also problematic, we resorted to using the average 2014 turnout for those districts. We then determined, based on our SEER predictions for each district and the number of expected major-party voters in each district, the predicted total number of Democratic and Republican votes on the national level, from which we get the predicted national two-party Democratic vote.

We then compare this to current generic ballot polls. Generic ballot polls ask respondents nationwide whether they plan to vote for the Democratic Congressional candidate or for the Republican Congressional candidate in their districts without naming the candidate. We use a weighted average of generic ballot polls, averaged using the same method as used for polls in an individual district (discussed below); the weighted average Democratic two-party vote is referred to here as the current National Mood. We then find the difference between the current National Mood and the National fundamental prediction discussed in the first paragraph. Let us call this difference the National Mood Shift.

Each district has an elasticity (taken from 538), which quantifies how much more or less than the national average a district is affected by shifts in the national mood. The average elasticity is \(1.00\) (affected the same as the country as a whole). For example, the Democratic vote percentage of a hypothetical district with elasticity \(0.90\) is expected to shift by \(0.9\) points for every 1-point shift in the National Mood, in the same direction as the national mood.

For districts that have polls for their congressional races, we construct a weighted average of those polls. We start by getting for each poll: the two-party Democratic vote prediction \((0 < p < 1)\), the number of days before the election that the poll was finished (\(t\)), and the sample size of the poll (\(n\)). The polls are weighted by their ages, based on the relative values of this function for the different ages of the polls:

This ensures that old polls are weighted less than newer polls, that the marginal penalty for being one day older decreases as the polls get older, and that the weights sum to \(1\). We then get the weighted average of the predictions by summing the products of each poll’s predicted Democratic two-party vote proportion and that poll’s weight. However, there is some variation in polls which we include as uncertainty in our model. One source of this variation is sampling error. Given a poll with Democratic vote share \(p\), Republican vote share \((1-p)=q\), and sample size \(n\), the average sampling error \(se\) of such a poll is given by:

For now, we will say that the standard deviation \(\sigma\) of each poll (i.e. the average error) is its sampling error.

However, there are other sources of variation that we are unable to empirically calculate. We divide the polls into four grades (A, B, C, and D; taken from 538) based on the quality of the pollster’s methodology. For each grade of polls, we took polls from previous House elections (starting in 2012) and found the average distance around the line of best fit for actual election results vs. poll results (i.e. the line that best predicted the actual election result given a poll result). Let’s call this average distance the past poll standard deviation for each grade.

For districts with polls, we take a weighted average of the bigmood prediction and aggregate poll prediction to get to our final prediction. The weight (\(0 < weight < 1\)) of the polls depends on 1) the number of polls, 2) the grade of each poll, and 3) the age (in days before the election) of each poll. We first calculate the Grade Point Sum (GPS) of all of the polls. If a district has \(m\) polls, and the \(i\)th poll has grade \(g_{i}\) and is from \(t_{i}\) days before the election, the GPS is:

The weighting of the aggregate poll prediction (\(w_{p}\)) is then given by:

The constants of the arctan function were chosen so that it has an asymptote of \(0.95\) (a district with a very large GPS has a poll weight very close to \( 0.95\)) and so that a district with two B polls, each finished the day of the election, will have poll weight \(0.6\). 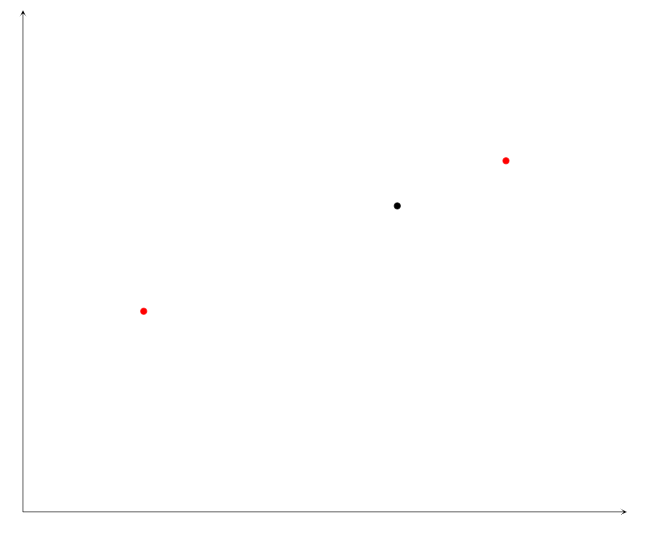 The closer they are in Figure 1, the more similar the districts by some metric formed by the demographic data. The red dots represent the districts with polling data. Blairvoyance then moves the points that represent district with polls to another dimension, which represent the poll result. Figure 2 is a representation of Figure 1 with the third axes of poll result is added, and Figure 3 shows the points being moved into the third dimension representing polls. 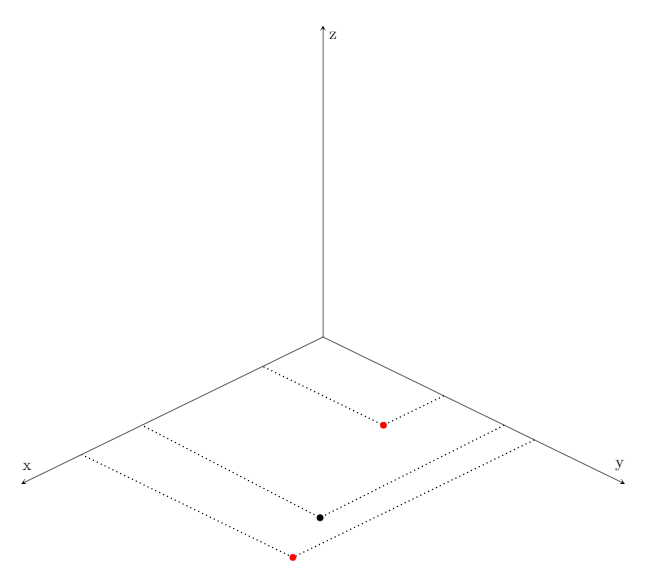 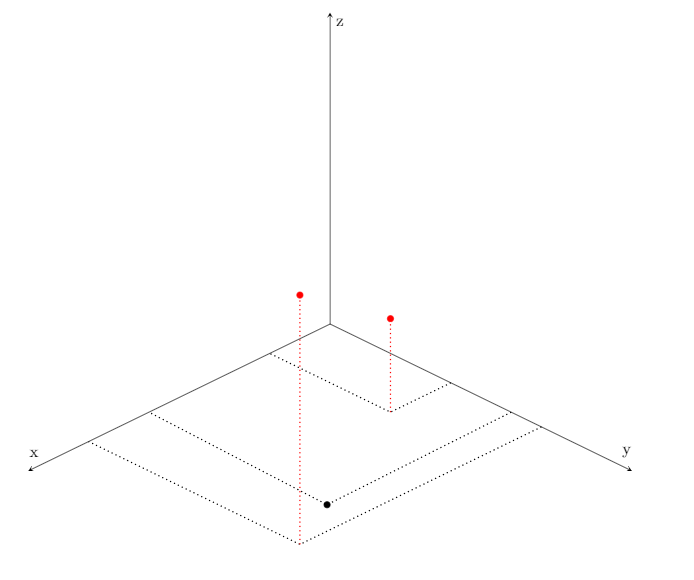 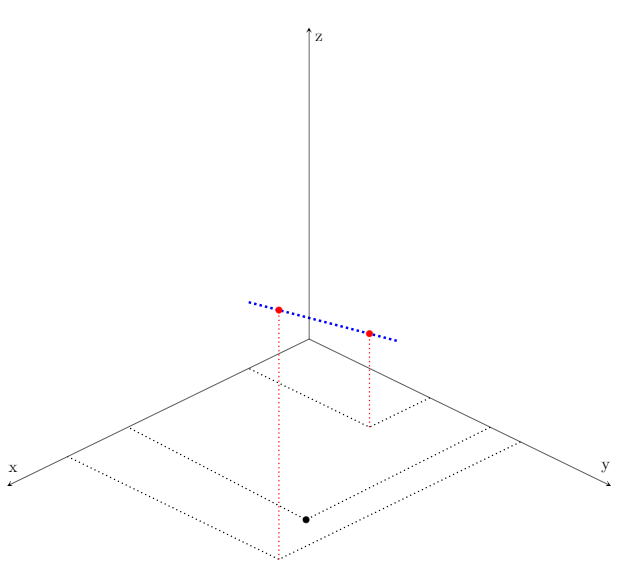 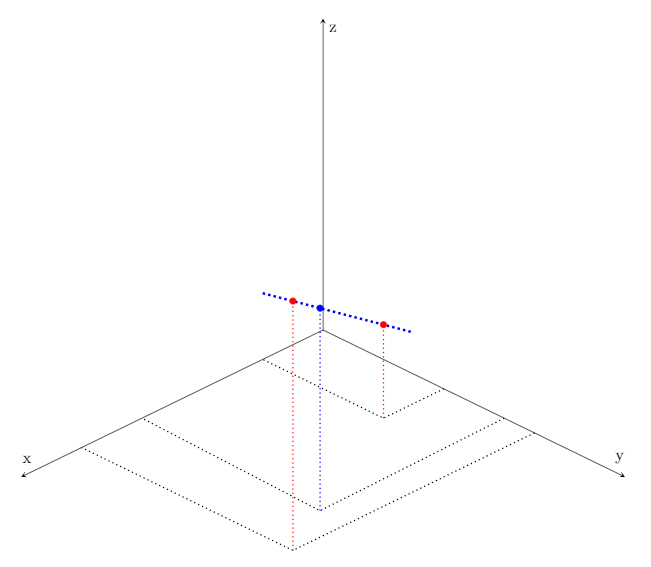 The Agglomeration Utilizing Statistical Predictions and Inquiries Concerning Elections (AUSPICE) is the final election forecast that the ORACLE of Blair gives a district every run. AUSPICE is a combination of the distribution provided by Bigmood and the averaged polls, or Blairvoyance in the absence of polls, weighted as mentioned above. Suppose the weight of bigmood is \(w_b\) and the weight of the averaged polls for a district (or Blairvoyance) to be \(w_l\). And suppose that bigmood gives a mean of \(\mu_b\) and a standard deviation of \(\sigma_b\) for the proportion of the two-party vote going to the Democratic nominee, and the polls give a mean of \(\mu_l\) and a standard deviation of \(\sigma_l\). The AUSPICE for that district will return a mean of \(w_l \mu_l + w_b \mu_b\) and a standard deviation of \(\sqrt{(w_l \sigma_l)^2+(w_b \sigma_b)^2}\).

At this point, we have predicted vote shares and standard deviations of vote shares, so it might seem that calculating the overall chance that a party gets a majority of seats is rather simple. However, this is not the case.

In order to avoid excessive computations or calculating an exact number, we simulate the entire House election \(10,000,000\) times each time we run our model. The probability that each party wins a majority of seats in the House is then about the number of simulations in which this happens divided by \(10,000,000\).

A naïve approach to use here would be to simulate each district separately, using the numbers we already have. However, this approach has the implicit assumption that the district vote shares are all independent, which is certainly not the case. For one, the systematic bias of polls can often be caused by the same factors from district to district. Also, since our model is not perfect, it may be consistently off in one direction for most districts. Thus, our simulation must introduce some correlation between districts.

Please note that in this example calculations may be shown with intermediate rounding. However, the actual computations used to produce results did not use intermediate rounding. This district is currently represented by Republican Steve Knight. He is being challenged by Democrat Katie Hill. This section was updated on October 26th.

Using the SEER predictions and procedure described above in the National Mood Shift section, our nationwide fundamental prediction with a 2014 turnout model is that Democrats would get \(49.5\%\) of the two-party vote. The current (at the time or writing) generic ballot average is that Democrats will get \(54.3\%\) of the two-party vote. This implies an average shift of \(+4.8\%\) to the Democratic two-party votes in each district to get the big mood predictions. This number will change as more generic ballot polls are conducted, but it is suitable for this example. CA-25 has an elasticity of \(0.97\), so it has a bigmood prediction of \(42.4\% + 0.97 \cdot 4.8\% = 47.1\%\).

This district has six polls:

The standard deviation and weight of each poll are: