While We’re at it, Let’s Make a Senate Model

A Rudimentary Senate Election Model Based off of ORACLE

ORACLE is built to create predictions for the House of Representatives. ORACLE looks at individual districts to do so, such an approach cannot be done when making a Senate model as Senators are voted upon by a State as a whole. Luckily, the Federal Election Commission (FEC) provides, for each state, holistic general election results. Therefore, they publish the number of votes cast statewide for Republican or Democratic candidates for the House even though the candidates are voted upon by only a single district. They also publish Senate election results. By observing the relationship between the two-party vote percentage cast statewide for the House and the two-party vote percentage cast for the Senate, we can create a model for the Senate Elections based off of ORACLE.

Derivation of the Model 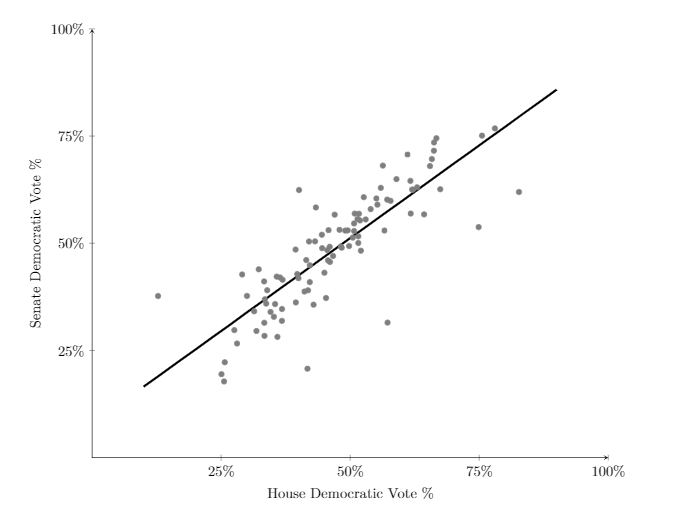 In order to get our Senate Democratic vote percentage, we begin by calculating the base number, inputting the House Democratic vote percentage to \(\text{House}\%\). Then if there is a Democratic incumbent we add \(6.35\%\), and if there is a Republican Incumbent, then we subtract \(5.34\%\). To visualize the creation of this model, it basically splits up the datapoints of Figure 1 into three groups based on incumbency and fits three parallel lines, one for each group, as shown in Figure 3. 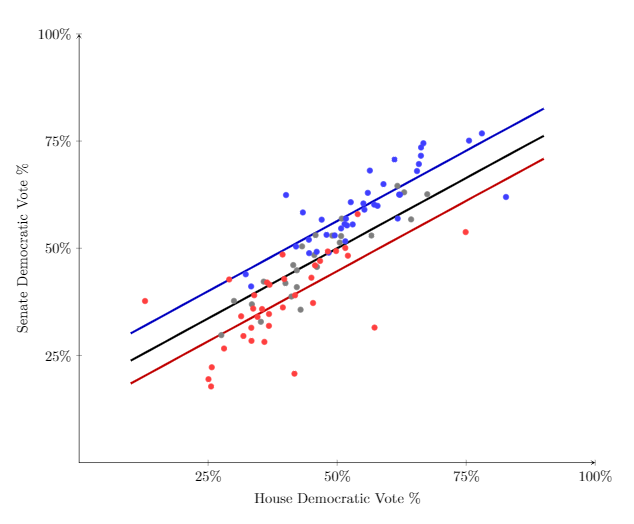 Figure 3. Plot of Regression of Figure 2

When I simulated the national election 1,000,000,000 times, here is the histogram produced for the make up of next year's Senate: 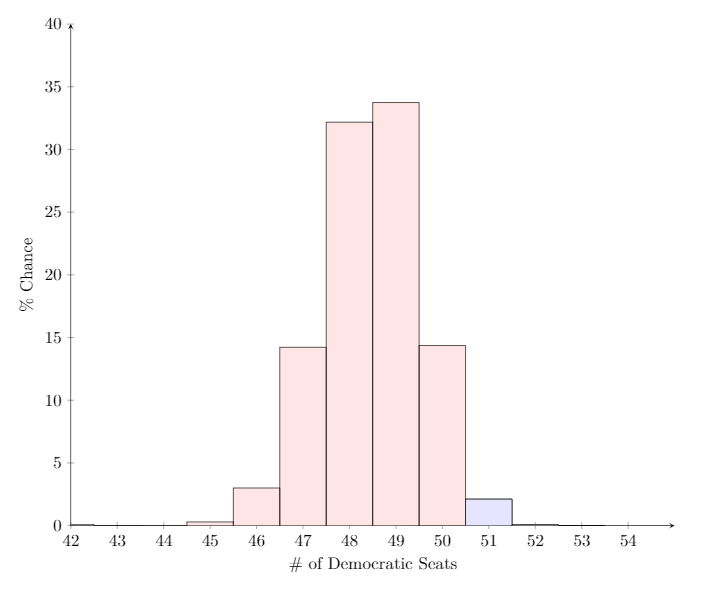 This model predicts that there is 97.8% chance that the Republicans will keep control over the Senate. There are several races that this model disagrees with expectation.

One type of discrepancy is races when an appointed Senator is running. This model considers such candidates to be incumbents, which gives them an incumbent advantage but they have not been a Senator for as long as the other candidates. Another set of discrepancies are races that are considered close: Typically the model predicts an expectedly close race to be too certain of a win for a candidate. Most notably, these races are in Florida, Missouri, and in Nevada. In the case of Florida, it is typically thought of as a split state, however, this year the Democrats are predictedly winning more easily than the Republicans. ORACLE predicts that the average Democratic vote percentage in the districts Democrats are predictedly winning in Florida is 75%, whereas the average Republican vote percentage in the districts Republicans are predictedly winning in Florida is 58%. This Democratic dominance in their districts is potentially explained by the national mood shift. Considering that of the 27 districts in Florida, predictedly 13 are voting Democrat, this leads to a high predicted statewide Democratic vote percentage which is reflected by our Florida prediction in this model.

The other two states that this model seems too certain about the winner are Missouri and Nevada. The cause for this is that the incumbency advantages simply skew the model too much. To put that into perspective, for a Democratic incumbent to predictedly lose, the statewide vote percentage must be less than 40%. Every percentage point beyond that increases the margin by \(0.6553\% \times 2 = 1.316\%\). Each percentage point matters a lot, as can be seen in the difference between the Arizona race and the Missouri race: A difference of about 1.5% in predicted vote percentage leads to a difference of 16% in the chance predicted that the winner will win. However, this incumbent advantage can be overcome as can be seen in North Dakota, where Heidi Heitkamp is predicted by the model to lose.