Why the Experts May Predict Otherwise: New York

We examined the state of New York, where districts range from solid blue to solid red and everything in between, and found four of these districts where there is a discrepancy between ORACLE's  predicted vote share and/or likelihood of democratic win and the predictions of FiveThirtyEight and Cook Political report. For the sake of this paper, a discrepancy is a 5% difference in vote share and  10% difference in probability of Democratic win. Districts 19 and 22 are both toss ups, yet we predict a different outcome than FiveThirtyEight with a drastic difference in the probability the Democrats will win. These differences may be attributed to FiveThirtyEight’s consideration of fundraising and challenger experience. In District 24, listed as likely Republican by Cook Political Report, ORACLE's calculated probability that Democrats will win is not only lower than most districts listed by Cook Political as solidly Republican, it is drastically lower than 538's calculated probability of a Democratic win as well. This can be attributed both to 538's consideration of fundraising as well as Cook Political Reports sole consideration of presidential elections when calculating the Partisan Voting Index of any one district.

Comparing predictions in toss up districts

New York District 22, a key tossup district, is predicted to have a Republican outcome by our model at the ORACLE of  Blair as by The Cook Political Report, however, statisticians at FiveThirtyEight are predicting a Democratic outcome. This district is 90.1% white, while only 3.2% Hispanic, 3.4% Black, and 2.3% Asian. This District has a history as a swing district with 49.8% and 41.76% of votes for the Democrat in the 2012  and 2016 Presidential Elections, respectively. This district located in central New York has Claudia Tenney running as the Republican incumbent candidate running against Democrat Anthony Brindisi. We predict the Democrats to share 46.5% of the two-party vote, while FiveThirtyEight predicts the Democrats to share 50.9% of these votes. This difference of 4.4% is not drastic, but may be due to the $600,000 difference in fundraising between the two candidates, $2,704,359 by Tenney and $3,351,316 by Brindisi, only taken account for by FiveThirtyEight. FiveThirtyEight quantifies the factor of fundraising to offer a 5.9 boost to the Democrats. Further, FiveThirtyEight gives the Democratic Party a 61.1% chance of winning, while we estimate a meer 23.6% chance the Democrats will win the House election in this district. Unlike the vote share, these probabilities of a Democratic win are drastically different, 37.5%, between our ORACLE and FiveThirtyEight’s prediction. The Democratic chance of winning is likely garnering a greater effect from the fundraising than the vote share, explaining the discrepancy between the two models. 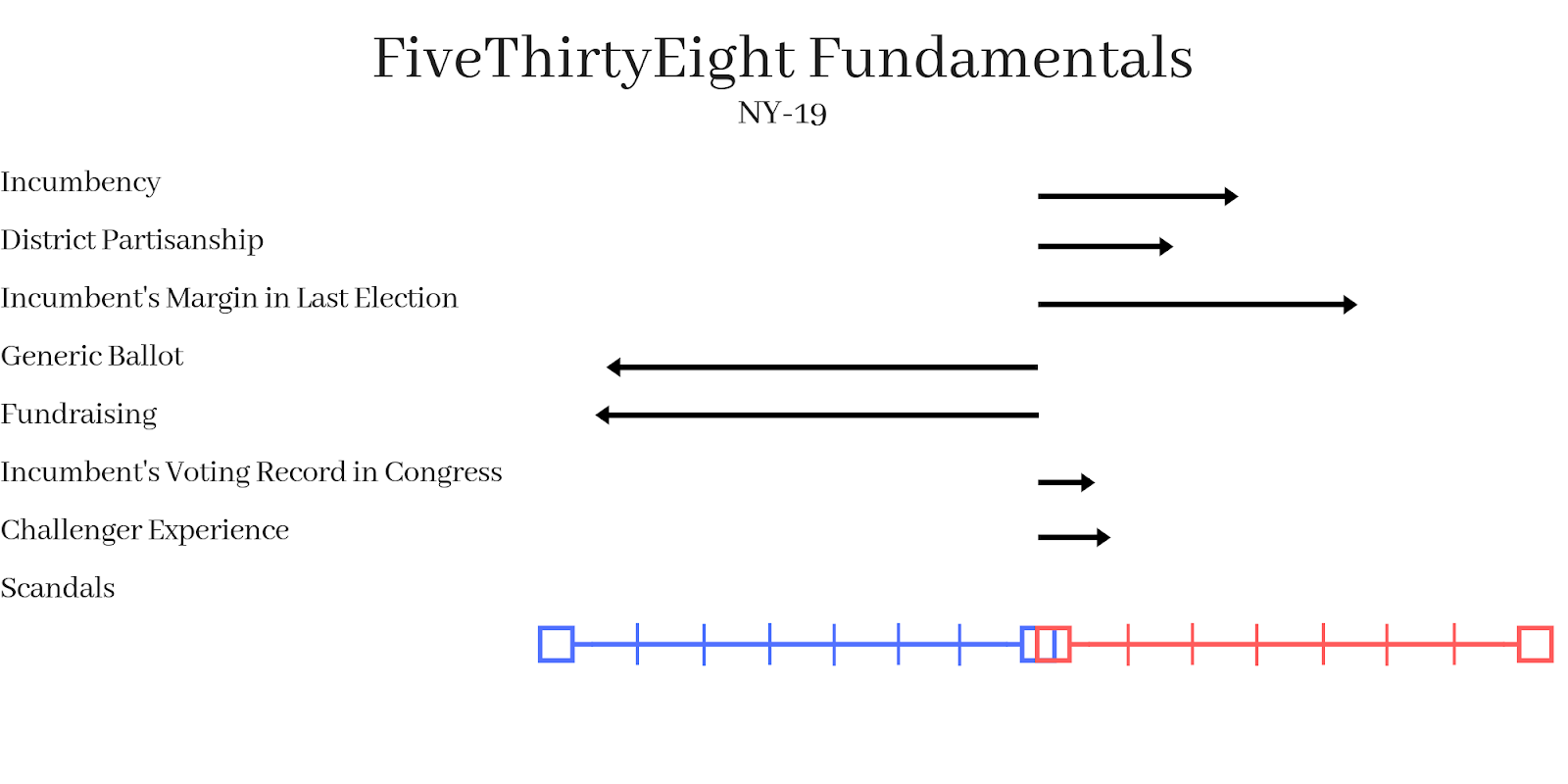 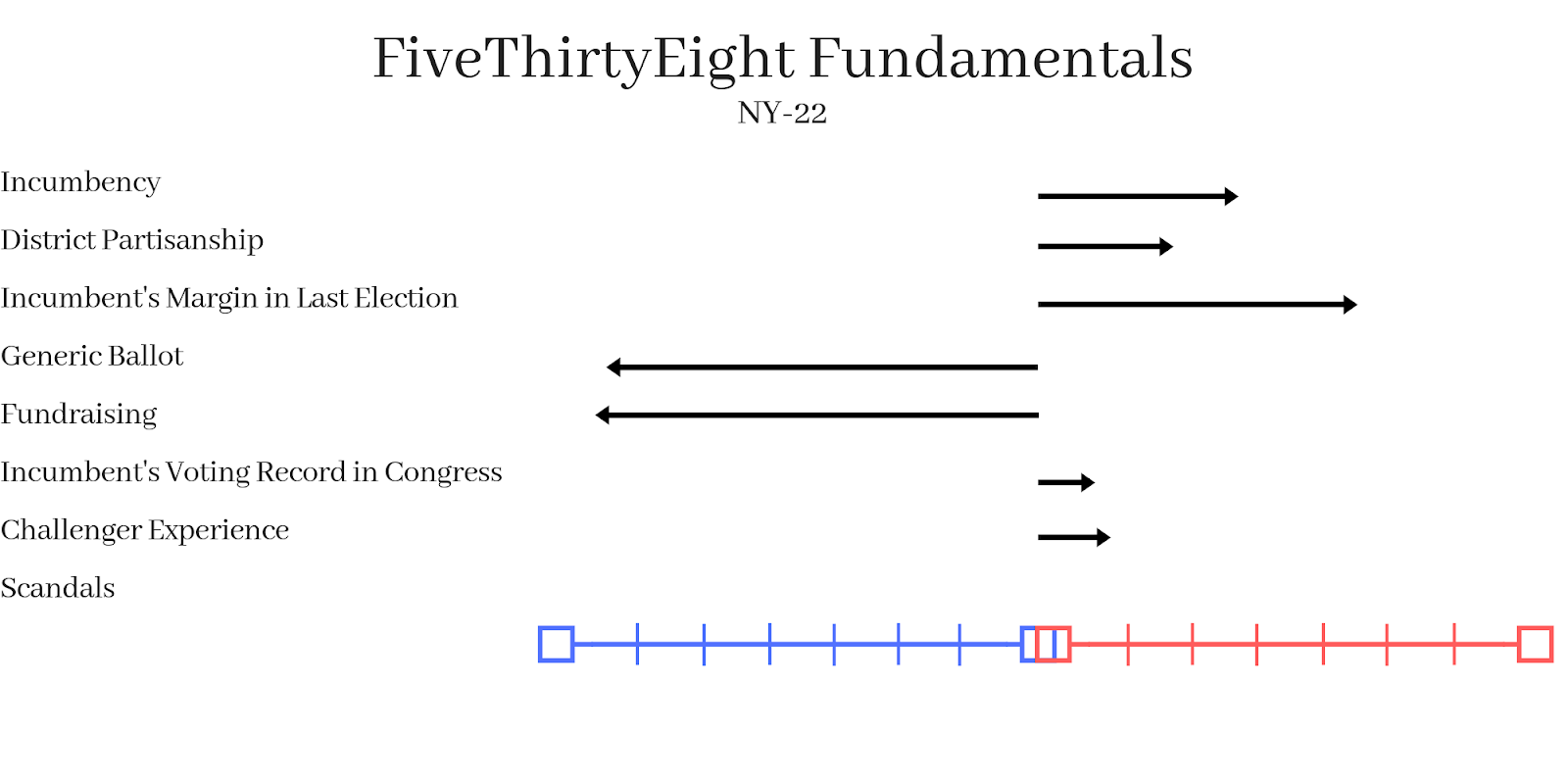 The impact of fundamentals in declaring competitive races

In NY-24 not only is our probability of the Democrats winning the election significantly lower than that predicted by 538, but it also causes a discrepancy with Cook's Political Report which rates this district as only Republican leaning, though both ORACLE's and 538's probabilities that the democrats will win are significantly lower than the in a solidly Republican district like  NY-11 (see Table 2). There could be several explanations for this phenomenon. First of all, NY-24 split the ticket in the 2016 election, voting for Clinton while also voting in by a margin of 21.1% their republican incumbent. In the calculation of the partisan lean of a district, Cook's Political Report for the most part only takes into account presidential elections because those allow for easy comparison between district and national partisan lean. However, in both ORACLE and 538's model take into account the results of congressional elections when calculating fundamentals, allowing for the models to reflect the splitting of the ticket that occured in 2016 in NY-24.

To explain the discrepancy between ORACLE's calculated probability of the democrats winning and 538's probability, one should again look to the fundamentals. There is one factor that separates our model from 538's that is truly meaningful in this case: fundraising. In NY-24 Dana Balter, the democratic candidate, has raised 246% more money than her opponent, Republican incumbent John Katko. This shifts the fundamental score 6.7 points to the left, citing the district as D +1.4, whereas without the fundraising being taken into account this district would have a score of  R +2.4, lowering the probability of the democratic candidate winning the race.

In creating ORACLE we did not include fundraising in the quantification of our fundamental score for each district. However, this might be the right decision because the candidate's popularity is reflected in the polls for that district. Candidates get money from interest groups all across the country and therefore, the polls are a better reflection of the district population mood than fundraising. Fundraising, as a metric exacerbates what is sometimes a non-existent popularity difference between the two candidates. Furthermore, the need for a candidate to raise money depends on their visibility within a given district. Incumbents will need to raise less money than non-incumbents, because they do not have to introduce themselves to the constituency. This, however, does not mean that the incumbents have a disadvantage, but rather that they do not need as much money to achieve their goals. These midterm elections with all of their visibility are a chance for interest groups to garner influence and for donors to make their mark as each candidate tries to get an edge on their competitor. Overall, fundraising is not necessarily reflective of the opinions of the constituents and thus ORACLE might be better off by not including it in calculating the fundamentals for each race.