Racing to the Finish Line

An Analysis of Partisan Voting Trends in Majority-Minority Districts

In some majority-minority districts, our model predicts an entirely different election outcome than the district’s history indicates. Majority Hispanic FL-27 and CA-10, 25, and 39, among others, all have strong Republican electoral histories but are predicted to vote Democratic by ORACLE. FL-27 is one example of this—though the 74.43% Hispanic district voted 58.00% Republican and 54.89% Republican in 2014 and 2016 house elections, respectively, our current prediction for the district is a 45.82% Republican vote, which would result in a Democratic win.

In the 2016 presidential election, 29% of Hispanic voters and 8% of Black voters voted for Trump, each two percentage points above the corresponding percentages from the 2012 presidential election. In order to determine whether we are seeing a new voting trend in minority populations, we analyzed the voting trends in each majority-minority district based on its racial plurality, or which racial group made up the largest percentage of the population.

We located historic congressional election data for the 122 districts that Ballotpedia found to have minority populations over 50%. We then separated the districts according to the largest minority racial group, resulting in 30 districts with a Black plurality and 52 with a Hispanic plurality.

The first trend we noticed is that majority-minority districts in California, Texas and Florida tend to vote considerably more Republican than other districts with similar percentages of minority groups. This was primarily true for majority-Hispanic districts, such as FL-27, which is 75.43% Hispanic and voted 54.89% Republican in the 2016 House election, or CA-21, which is 75.27% Hispanic and voted 56.7% Republican in the same election (despite voting Democratic in most past presidential elections). In fact, of the 20 majority-minority districts that have voted consistently Republican in each House election since 2014, 8 were plurality-Hispanic (most of the rest were plurality-White), and 9 out of the 52 plurality-Hispanic districts voted Republican in at least one of these elections. However, it’s important to note that the electoral leanings of various ethnic groups differ. For example, Puerto Ricans tend to vote more Democratic than Cuban-Americans do.

Many of our model’s predictions for these plurality-Hispanic districts, however, seem to lean considerably Democratic. In 53.77% Hispanic district NM-02, for instance, though 64.48% of voters voted Republican in 2014 House elections and 62.75% voted Republican in 2016 House elections, our model predicts only a 51.40% Republican vote in the upcoming midterms. According to our model, the Republican vote percentage should decrease by more than 11% in just two years, despite a less than 2% shift in the two years prior. A similar trend exists in 75.43% Hispanic FL-27, where, despite a 54.89% Republican House election in 2016, we predict a 45.82% Democratic vote in this year’s midterm. 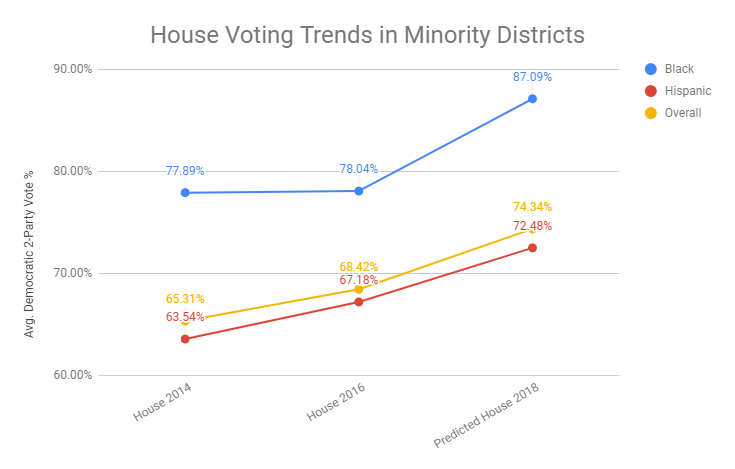