Can we use our model to predict the 2014 House of Representatives Election?

It’s all well and good to create a model, but, if we don’t know it can work, what’s it even worth? We decided to test out our model on predicting the 2014 election so we can see if what we created is an actual viable model. We chose 2014 because it was the most recent midterm election; we figured this would be better than 2016 because the 2016 election was a general election, so turnout is different and there are also probably effects on the house caused by down ballot voting by people who only vote for the president and people from their party.

Because of time constraints, we had to get rid of some aspects of the model. Gathering 4 year old polls for every state is just not practical, so the only polls our model accounted for where national polls gathered in the month prior to the election. Most of the individual district polls were buried under years of polls and were tedious to dig out, but it turns out that these polls did not really matter (more about that later). Because we weren’t using district polls we also had to throw out Blairvoyance, because Blairvoyance is based on polls.

In our test, we retained the same overall algorithm and method. Because of our many changes, we had to modify the code slightly. We changed the parts of the code that took in the past two election so that it only took in one election. We also took out lines of code that required poll results and Blairvoyance.

Because our modified model predicted the past relatively well, it raises the question whether or not district polls really matter. With the current model, we place a relatively high standard on whether a district has has polls and if they don’t we use Blairvoyance to act as the polls. The polls do add value, in a way, because they reflect the current feelings of the nation (if the poll is done well). Based on the national polls we gathered, the general stance of the U.S. population was leaning Republican, which closely aligns with our fundamentals. So, since the fundamental data reflected the general national mood, it makes sense that our modified model predicts the 2012 election relatively well. 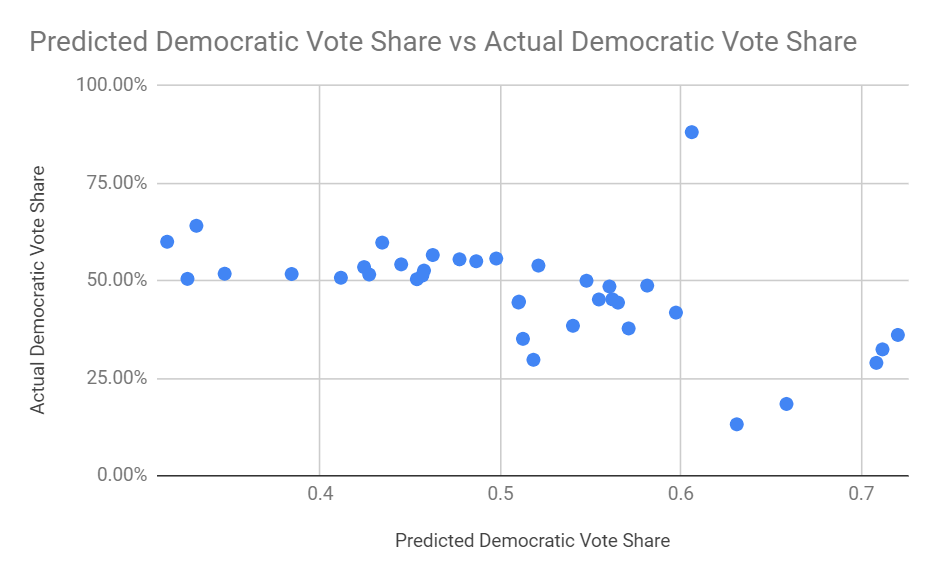 The 2014 House of Representatives Election was a rough time for the Democrats. They lost seats in the House and never gained the majority. Even though our model for the 2018 House elections favor Democrats, through our tests, we can see that it can be used to predict a Republican win from the past.