As a high school statistical model, we strive to learn ways to improve on the complexity of our model by looking at the work of our more professional colleagues. In order to do this, we examined the model of popular magazine format newspaper The Economist. Though The Economist has far more resources to create a more advanced model, we wanted to see if Blair ORACLE’s methodology measures up to The Economist’s by completing a statistical analysis examining the difference between our predictions.

More specifically, we looked at districts with differences that we deemed substantial. We calculated a percentage of the prediction (POP) to see how dramatically the difference would affect our model’s determination of who the winner is and the probability of that person winning. 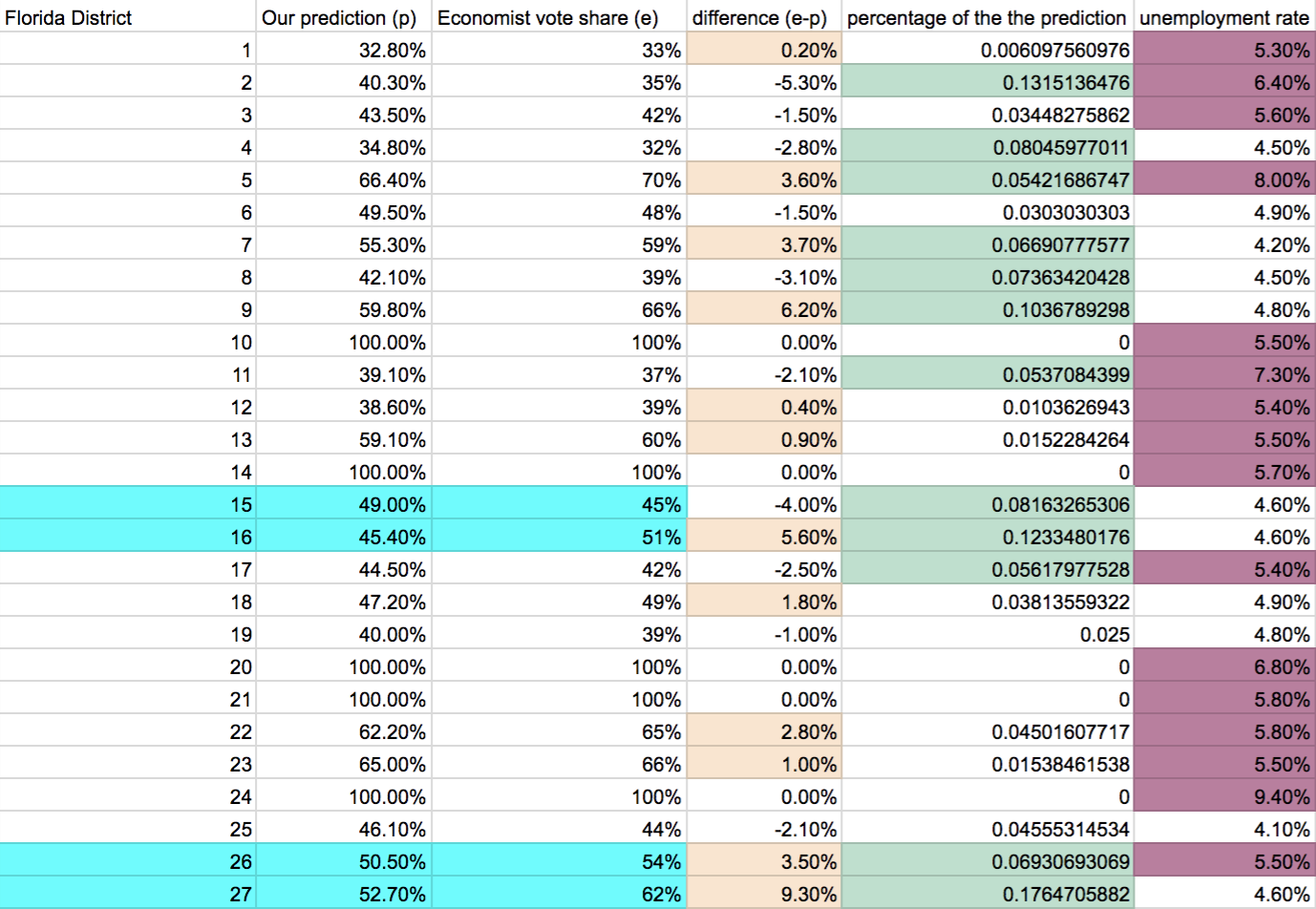 Our methodology and The Economist's methodology are similar in their basic structure: both factor in national mood/generic ballot, fundamentals, and partisan lean. Both of our fundamentals include whether it is a presidential year or a midterm and if it is a presidential year, whether the president is running for reelection. However, The Economist’s model, unlike ours, includes factors about the state of the economy, such as the unemployment rate. Our model looks at median household income only when there are no polls available to compare districts with Blairvoyance.

Another substantial difference between our models is the number of simulation’s ran. The election is only simulated 10,000 times in The Economist’s model, but ours 10,000,000 times for ORACLE of Blair’s. This could mean that our model produces a more statistically accurate representation of voting with less variation in the results. The Economist’s methodology also includes calculating the generic ballot accuracy by comparing it to what they a “perfect calibration” as well as accounting for the variability over the years of the number of people voting for the same party twice. This perfect calibration is the expected two-party percentage for the president’s party based on the generic ballot polls for a given year. Oracle of Blair similarly calibrates the weight to the national popular House vote from 2002 to 2016.

In terms of the information factored into the models, a major difference between Blair Oracle and The Economist model is that The Economist includes information about the economy in determining the fundamentals and partisan lean. We obtained the unemployment rate for the districts from 2017 American Community Survey data and compared it to voting trends to predict how The Economist might have incorporated it into their model since they are not clear about how they incorporate unemployment data.

According to findings by the APM Research Lab, a lower unemployment rate tends to boost a Republican’s chances of election. The national unemployment rate is at an all-time low around 4%, so we expect that factoring in the economy into a model would skew the predictions based on historically high unemployment rates.

Though the economy does not appear to be the most important issue to voters this election, we have to wait until Nov. 6 (and possibly later) until we can ultimately decide what factors influenced Oracle of Blair, The Economist model, and voters nationwide. Economic factors appears to be the largest difference in our methodology and The Economist's, creating significant differences in our predictions for certain highly contested districts, the largest being a 9.3 percentage difference for the swing district of Florida 27. After the election, we will take a closer look at the state of Florida to see whether our model or the The Economist's is more accurate, and if The Economist truly should have taken the economy into account.