Pennsylvania’s weird. Not because of the obsession with cheese-steaks or that they can’t decide whether to call it “soda” or “pop”- no, this is about electoral districts. It’s the only state which underwent a redistricting at the house level recently enough to impact our electoral model, so for us, Pennsylvania is weird- we have access to less historical data about elections and current data about demographics. In this blog post we’ll explain some of the weirdness, including what we did differently in our predictions for the state and what effects these changes might have.

Following the 2010 census, Republican officials led a Pennsylvania redistricting. The redistricting gave Republicans an advantage in the 2012 elections, and Republican representatives now hold 13 of the 18 house seats. This is disproportionate- in the 2016 presidential election Donald Trump won Pennsylvania by only about 45,000 votes of the 6 million that were cast in the state.

On January 22, 2018, the Pennsylvania supreme court ruled that the map of districts had illegal partisan gerrymandering. A newly redistricted map was made for the 2018 elections. Republican lawmakers tried to fight the new map by filing a suit to prevent it from being implemented, but the Pennsylvania supreme court struck down the suit. Pennsylvania Republicans also tried to get the Supreme Court of the United States involved. Pennsylvania Governor, Tom Wolf, failed to come to an agreement with the court about what the new districts would look like, so the Pennsylvania Supreme Court took matters into their own hands and released a new, court-ordered map on February 19, 2018. The new map has an estimated 10 Republican districts and 8 Democratic according to Nate Cohn at the New York Times. This gives the Dems an estimated 5 more seats than the previous map did. 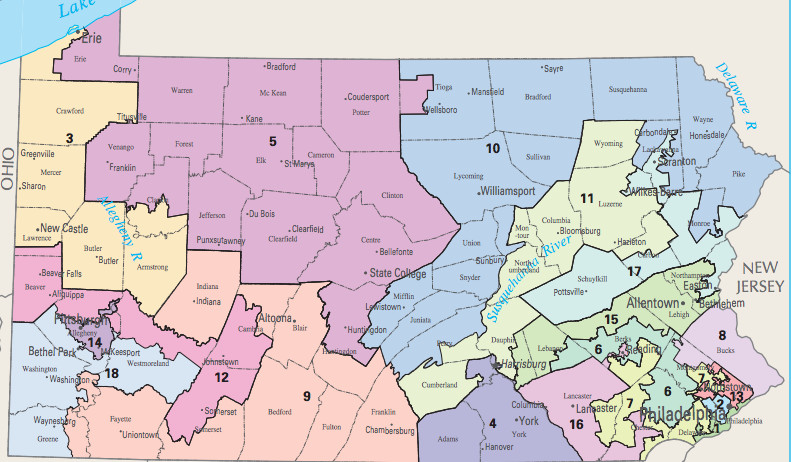 Key Districts at a Glance

District 1 did not undergo much change from the old District 8. It retains all of a slightly-democratic Bucks County but it flips a Republican-leaning sliver of northern Montgomery County for a Democratic-leaning sliver of central Montgomery County. The District remains a battleground district bound for a close race but the new lines are ever so slightly in favor of the Democrats. Republican Brian Fitzpatrick was the candidate who earned the open seat in this battleground district in 2016. After his first term, the new district lines do not affect his candidacy too much but it is still the closest district in the state.

Not much is affected by the redrawing of District 2. A strongly democratic district only becomes slightly less democratic. It loses parts of Chester and Delaware counties and is placed entirely in Philadelphia. This would have given the district two Democratic incumbents in the primaries: Brendan Boyle from the old 13th and Robert Brady from the old 1st. However, Brady announced he would not run for re-election leaving Boyle in a strongly Democratic district.

When compared to the old District 15, District 7 loses a large rural, Republican area to the west that made the district swing in favor of Republicans. That loss coupled with the gain of democratic parts of Coolbaugh and Easton swing the district in favor of Democrats. Incumbent Charlie Dent will have his work cut out for him to win in this changing district.

The old District 17 stretched from the eastern border of the state all the way in to Johnstown while wrapping around the city of Pittsburgh. Now, the district takes up more of the outskirts of Pittsburgh and is much more condensed to the east. What used to be a strong Republican district is now a district that only narrowly favored Trump. Add in Democrat Conor Lamb’s surprising special election victory and this district could easily flip away from incumbent Keith Rothfus.

District 16 used to take a largely Republican area and group it with the Democratic center of Lancaster and outskirts of Philadelphia. It also managed to include the Democratic area of Reading. Philadelphia and Reading are now removed from the district adding more Republican coverage. This takes a leaning Republican district won by Lloyd Smucker (R) and slants it more in his favor. Even here though, the adding of superfluous Republican areas takes away from other districts eventually leading to a greater Democratic representation in the state.

Previously, this district had split up the city of Harrisburg and hence numerous democratic votes. The new District 12 contains all of Harrisburg while giving up republican areas along the southern border. It also retains the democratic area of York, turning a safe republican district into a republican leaning district. Despite having served three terms, Republican Scott Perry now may lose his seat to Democratic challenger George Scott.

The previous drawing of District 6 completely wrapped around and avoided Reading leaving it to be picked up by District 16. The new District 6 takes in the area lost by old District 1, picking up the outskirts of Philadelphia and the aforementioned Reading. A Democratic-leaning district goes from a very narrow margin to a sizeable one. The current Republican representative, Ryan Costello, is retiring and leaves the open seat to be likely taken by Democrats.

District 7 used to be a swing district. It was wrapped around Philadelphia and was referred to as one of the most gerrymandered districts in the nation. The new district, an open seat in the coming elections, was left vacant by Pat Meehan. Meehan retired after a sexual harassment scandal. The new district is now strongly Democratic-leaning. The district picks up parts of Philadelphia and the surrounding cities.

Our Methodology for Pennsylvania

Incumbency: We judged incumbency based on whether there was a Democrat or Republican incumbent running, regardless of where they had previously been elected to office. Because of the redistricting there was one district with both a Democrat incumbent and a Republican incumbent running, but by following the general protocol of our model (adding the Democratic advantage and subtracting the Republican one) the two essentially canceled each other out with no further problems.

Rural Population %: We looked at a map of the counties in Pennsylvania overlayed with the districts and figured out the demographics for each district based on those of the counties they contained. In the case of counties split between districts, we placed the county in the district that contained the largest portion of it. In the case of districts like 2 and 3, which are both contained by Philadelphia County, we used statistics from the major county (in this case Philadelphia County) for both of them.

Past political races %: 2012 and 2016 presidential results were obtained from the Daily Kos who redistributed votes by counties, boroughs, and precincts to their new districts using the Supreme Court’s document with textual descriptions of each new district. In order to estimate the past house races, we took the average of how the district voted in the last two presidential elections, subtracted the national average, and then added the national average for that house race.

General Demographics: We were able to find some census information for the new districts by looking at the data by county but couldn’t find all of the information that our algorithm needed due to both some data being missing and some data being classified differently than our algorithm called for. Because of this, our model isn’t using the demographics and is instead just looking at how the district voted in the past and any global factors.

While the effects of our missing knowledge about Pennsylvania’s new districts, and the methods we’re using to compensate for it, are hard to judge before ballots are cast, a rough indicator of the success of our PA model is shown below- the similarity of our predictions to other prominent (maybe *slightly* more prominent) probabilistic models. Included are the chances of each democratic candidate to win their race and the probability that they will win, as predicted by our model, fivethirtyeight.com, and thecrosstab.com on October 22, 2018.  The highlighted squares are in districts with predicted Dem probabilities that differ 10% or more or predicted margins that differ 5 points or more. A yellow highlight means the difference is between our model and 538, orange means it's between our model and crosstab, and red means it's between our model and both of the others.

Only one race, PA-01, is predicted to go to a different party by our model than the other two, and all three models predict the race to be within one point. This indicates that our results are not drastically wrong, at least in any way that the other models aren’t as well. However, there are a few races where we give a candidate a shot who the other models have given <1% chance of winning- notably, PA-09 and PA-14. Other significant differences are apparent, with our predicted margin in 12 of the 18 districts being at least 5 points different. But overall, our numbers our certainly not ridiculous. The average of the absolute value difference between our prediction and 538’s in each race is 5.68 points, while the average between us and Crosstab is 3.95. To put this into perspective, the average difference between 538 and Crosstab in these races is 5.31 points. These differences could be explained by many different factors (tweaks in algorithms, consideration of things like fundraising, different background information about the new districts, etc.), but whatever the causes our model does not appear to be more different from the other models than would be reasonable. It remains to be seen whether the situation in Pennsylvania will translate into an outcome distinct from the results of the rest of our model, but while we wait for election day we appear to be sitting in essentially the same boat as others attempting to predict these races.